Two weeks ago, I began a new position at Lutheran Theological Southern Seminary as an adjunct professor.

Obviously they are there, in South Carolina, and I am here, in Two Harbors.

It’s a heck of a commute. 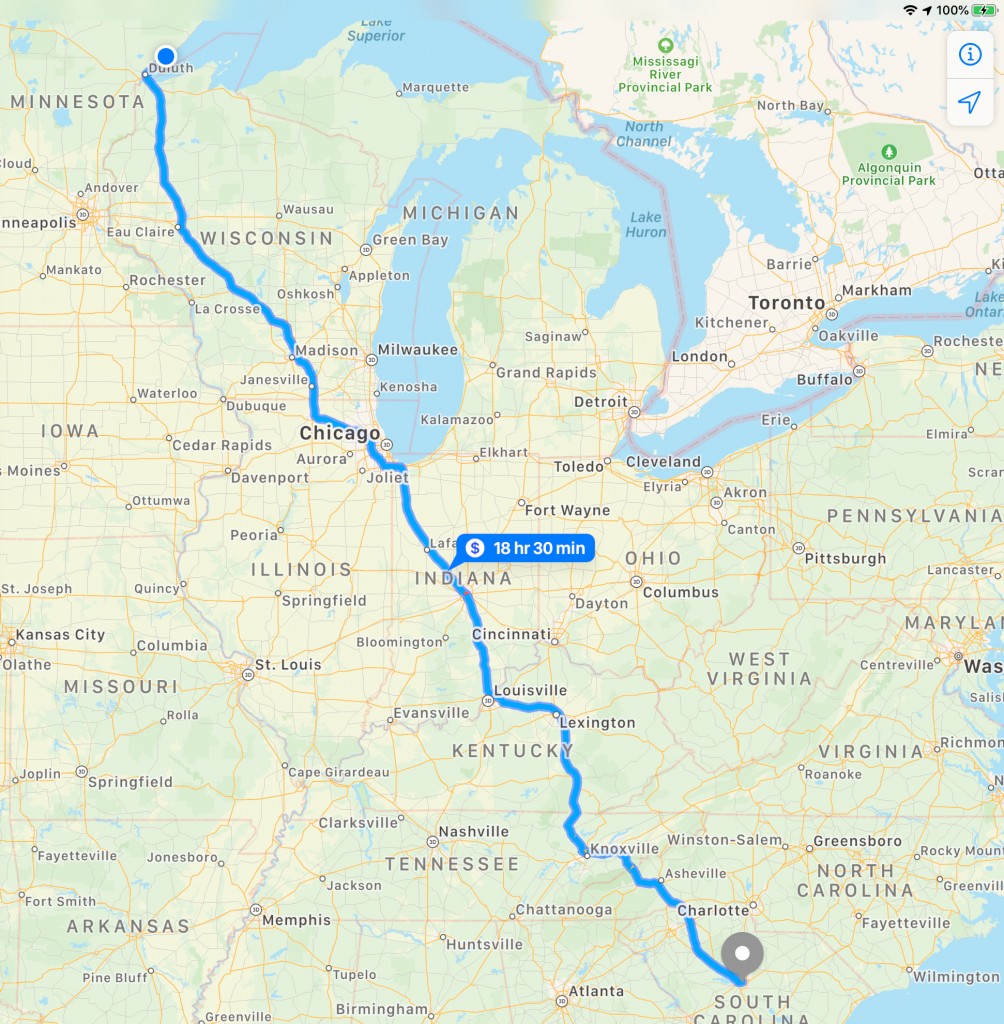 Except, despite traveling there a couple of weeks ago to meet the students and see the campus, the bulk of the course is via Zoom, so the schlepp to class is really just to my comfy spot on the couch by the fire.

I’m teaching the Lutheran Confessions, this series of documents and statements of faith to which we Lutherans not just have affinity, but claim to be illustrative of the gospel and therefore who of we are as Christians.

To make the point of the point of the Confessions, I used a couple of photographs from Regensburg, Germany (where we lived for five years while I did my doctoral work) and a legend, one that may or not have facts to back it up.

Then again, any self-respecting legend does not look to facts to shore up its legitimacy.

So first, I shone this one on the screen: 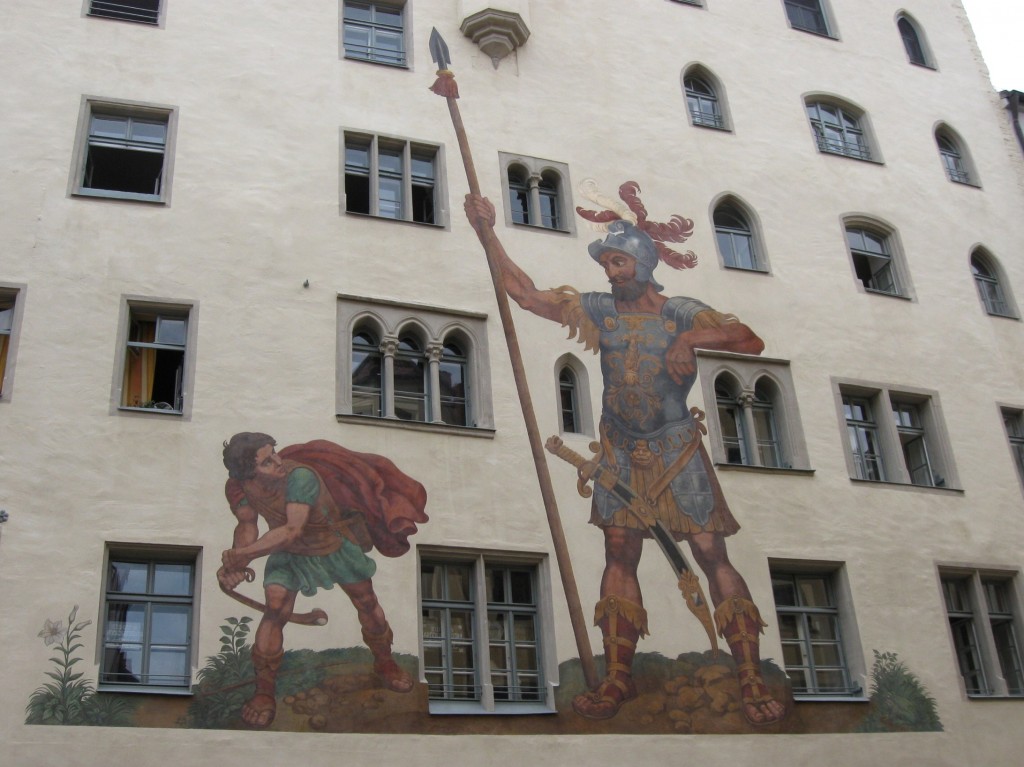 This mural of David and Goliath is painted on the facade of an ancient Italian-style palace, the sort which dots most of Regensburg’s inner city.

One of many tales that have surfaced to explain its history is this: beneath these windows were two fabric stores, one small and one large.

The winner would take all, as in, specifically, the store of the loser.

After it was all said and done, not only did the small shop owner win, but he had this exact mural commissioned, for all to see, on the side of what was now his quite significantly extended storefront.

Talk about a flaunted neener-neener.

(And if you take a look in the lower right hand corner, you will see a frog, Frosch in German, for that is said to be the name of the card game that was won, and lost.)

Now, it is entirely possible that this has…stretches of truth, but it does make for a wonderful story.

According to some however, there is even more to the story, at least to the story of the defeated fabric store owner.

Legend has it that he was not only arrogant, but corrupt too.

So a customer would bring a bolt of fabric to his counter to be cut and purchased, only to get home and discover that she or he had been shorted: rather than, say, a yard of cloth, they received 2½ feet.

Complaints rose up, and City Hall decided to do something about it.

Here is the City Hall (Altes Rathaus) in my beloved Regensburg—we lived just a block away from here.

Anyway, to the photo: 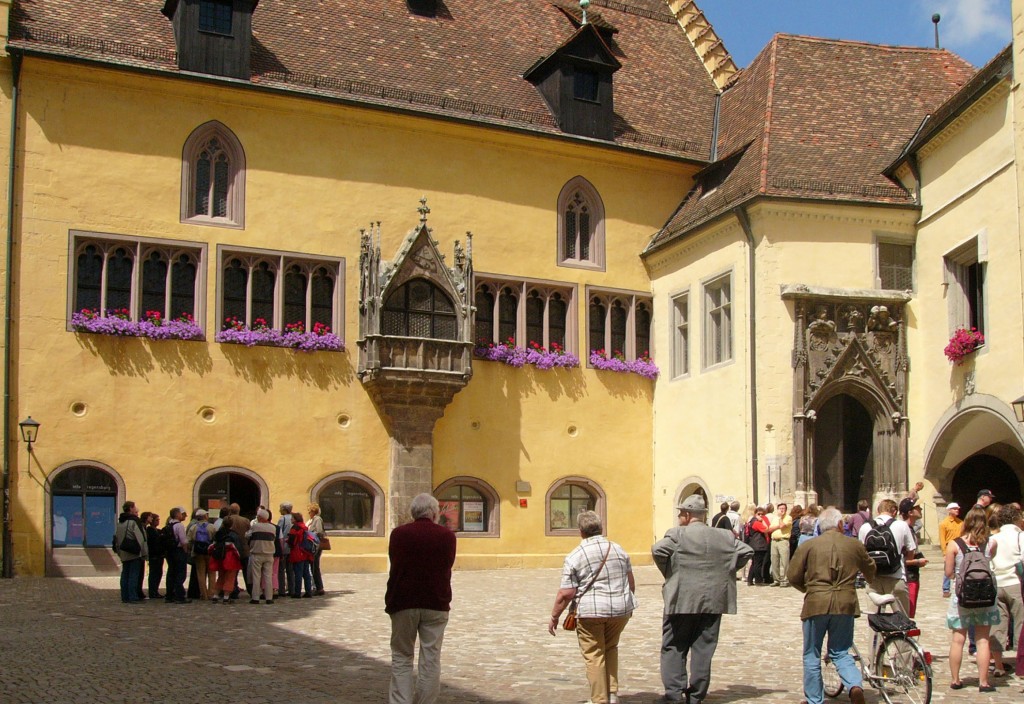 Heaps of history, including Reformation history, happened in this Hall.

But take a look at the entryway, to the right of the photograph.

And then take a look to the left of the entryway.

Do you see two bars of varying lengths, and another object in the center of them? 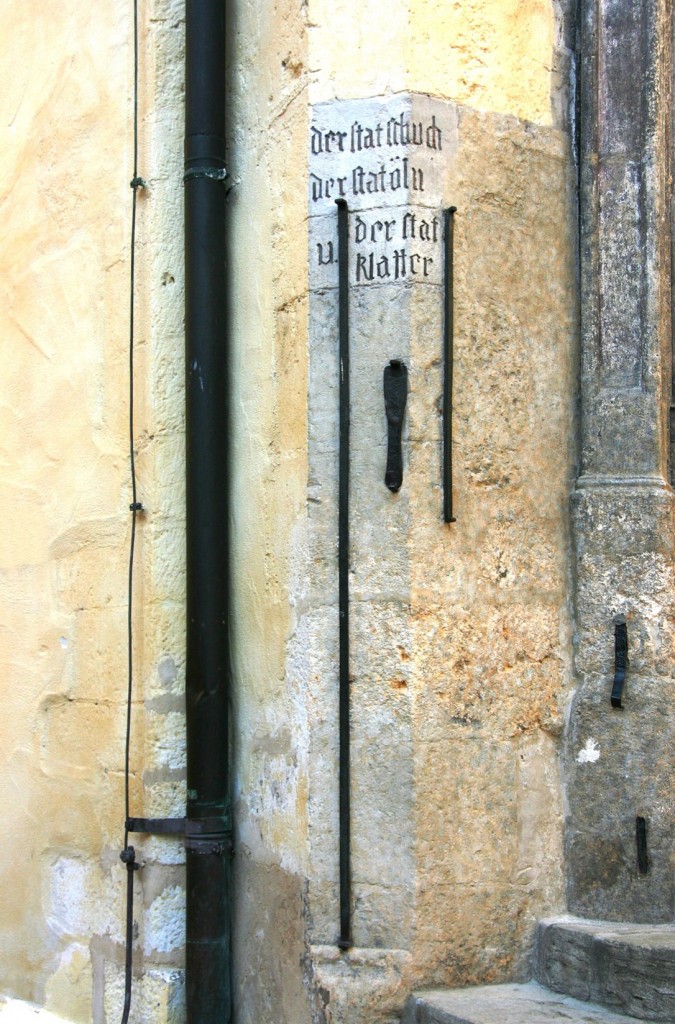 Turns out that these bars were imposed on the side of Regensburg’s center of government, community, and commerce, precisely to establish common metrics of measurement.

People then could march their bolt of fabric, and the store owner, down a couple of blocks to these rods, hold the cloth up to it, and simultaneously hold him to it, and be assured that they were actually going home with enough fabric for their Dirndls.

So these bars were called “Klafters;” you can read more about them here, but please don’t, because then the legend that ties these to the mural becomes…sketchy.

But to the point of this blog, Klafter were also known as, wait for it, canons.

Not cannons, as in “boom,” but canons, as in ‘rule of law.’ It comes from the Greek word, kanon, which means, unsurprisingly, really, a “straight rod or bar,” or a standard.

Some of us are familiar with the term “the canon of Scripture;” we Lutherans might know that we’ve been accused of (or happily claim) having a Canon within the Canon, because we tend to have particular affection for Paul’s take on matters.

All of this said, these rods, these Klafters, these canons, these fathoms, they are the communally-agreed standard by which something is mutually agreed to be just, to be correct, to be legit, and it’s the thing by which we concur we will live.

To that degree, then, the Lutheran Confessions are the Klafters, the canons, the fathoms, by which Lutherans understand what it is not just to be Lutheran, but to be Christian.

When anything comes up, we hold it up to these documents, and we agree that ‘X’ does, or does not, measure up, so to speak.

For 231 years, our nation has held the Constitution as being the Klafter, the canon, the fathom by which we would hold something to be just, to be correct, to be legit.

Yesterday, the GOP took the Klafter down.

The communal canon, the standard by which we’ve agreed is the way that we will live as citizens of the United States, in a Republic by which elections are decided not by demagogues or foreign governments but by its citizens, all of whom are judged with fair trials including witnesses and documents, this canon was ripped off the building.

What happened yesterday is unfathomable.

The actions yesterday, and the damage done, is literally immeasurable in consequence and harm.

My daughter and I, we go out to eat every Friday night, because once or twice a week she will stay in Duluth with my father because of late night or early morning obligations she has in Duluth—a blessing for my father, and we are blessed by my father, but I miss her when she’s gone, and so Friday nights are special, intentional, connecting moments.

But after the news of the day, even with an array of appetizers and flatbread pizzas on the table before us and treasured time between us, the two of us were numb.

When we could find words to express what we were feeling, and thinking, they were like these:

What do we do when the thing to which we turn for guidance, for norms, for communal accountability, is rendered irrelevant?

What to do when there is no reliable communal standard?

We are taught to trust the Constitution, and to trust that those who swear an oath by it will live by it.

We are taught to trust elections, to believe that they are fair, and that those who are sent to office through them will live out their elected roles with integrity.

So, given that, what is now our Klafter?

What is our canon?

What is the fathom when everything is unfathomable?

What is the standard by which we shall live?

And so, with everything in political and constitutional disarray, I decided that this, here, this is the only Canon my family and I, and that Christians, as a whole, by faith claims (found not least of all in the Canon of the Lutheran Confessions), can truly trust:

The temptation was real, yesterday, to not just sit on that couch of mine by the fire, but to lay down on it and stay there.

But were I to do it, I would let death win.

I would let the death of the Constitution win.

I would let the death of GOP policies that rip babies from parents, that take away funding from people with disabilities like my son, that keep refugees and immigrants out, that remove protections from our environment, that refuse to protect GLBTQIA people, that remove social supports from the Least of These, that incite racial and religious bigotry, I would let that, I would let them, win.

And that cannot happen.

We may have lost the Canon of the Constitution yesterday, but we did not lose the Canon of Scripture, the one that compels us to speak and to act.

We are compelled to speak and to act.

We are compelled to speak and to act precisely on behalf of those whose voices and whose lives are being sacrificed for the sake of a corrupt president (even Dershowitz says so), accused by multiple women of sexual assault, who was recorded of proudly grabbing a woman’s “pussy”, who mocks people with disabilities, who bullies, who is racist, who lies, and who brazenly and proudly cages children.

That is my claim.

But it has no validity unless I hold it up to something beyond my own opinion.

So let us turn to the Canon of Scripture, to see whether this claim measures up.

As much as some want us to believe that Trump is God, or that God has chosen Trump and that therefore Christians must chose Trump, there is nothing, nothing, about Donald Trump’s agenda that is of God’s.

I’m going to say it again, especially for those of you who read this blog and still support Donald Trump:

There is nothing of his agenda that is of God’s.

This is not just a moment, but a Moment, to recall that if we say we are Christian, we recall, and then we live out, this conviction:

Trump is not God, and Trump will not be my Lord.

For that matter, as noble as it is (was?), even the Constitution is not my God.

It, too, can obviously pass away.

So in these days, then, what metric matters?

How do we gauge what is just?

To what canon can we turn?

By what Klafter shall I live?

For Christians, it is this:

We shall love our neighbor.

Our Lord Jesus is risen.

Death does not win.

We are freed to trust that news, to put that news into action, to be ambassadors of that news that death is real but life is real-er, and to be tangible expression of it via presence and practical help and promise, bringing that life-filled salvation in Jesus’ name.

The Gospel news that Jesus is risen, and the freedom that springs from it, is unfathomable.

And I trust it far more than I trust the unfathomable turpitude of today’s GOP.