It’s the liturgical season, as of yesterday, in which we now sit.

It’s marked by the mysterious, nebulous, momentous advent of the Magi, the Wise Men, who came from afar due to a star to pay Jesus and his family respect.

Truth is, for all the tradition built up around the lore of these Men from the East, we don’t have much, scripturally, to go on: Matthew doesn’t bother with giving us the exact number of Magi making their way to the manger (though ask any child who has ever been in a Christmas program, and they will bust out singing about three men from ‘the Orient’), nor any record of their names (but even here history has supplied us—and the Magi—with the why-not options of Melchior, Balthazar, and Caspar); and we don’t really know why these particular gifts were offered (must say, any number of women have suggested that diapers, fresh clothes for both Mary and Jesus, and a bottle of really good wine would have been way more practical and welcome).

The text from which we get all the information we have is right here in Matthew 2:1-18:

2In the time of King Herod, after Jesus was born in Bethlehem of Judea, wise men from the East came to Jerusalem, 2asking, “Where is the child who has been born king of the Jews? For we observed his star at its rising, and have come to pay him homage.” 3When King Herod heard this, he was frightened, and all Jerusalem with him; 4and calling together all the chief priests and scribes of the people, he inquired of them where the Messiah was to be born. 5They told him, “In Bethlehem of Judea; for so it has been written by the prophet: 6‘And you, Bethlehem, in the land of Judah, are by no means least among the rulers of Judah; for from you shall come a ruler who is to shepherd my people Israel.’” 7Then Herod secretly called for the wise men and learned from them the exact time when the star had appeared. 8Then he sent them to Bethlehem, saying, “Go and search diligently for the child; and when you have found him, bring me word so that I may also go and pay him homage.”

9When they had heard the king, they set out; and there, ahead of them, went the star that they had seen at its rising, until it stopped over the place where the child was. 10When they saw that the star had stopped, they were overwhelmed with joy. 11On entering the house, they saw the child with Mary his mother; and they knelt down and paid him homage. Then, opening their treasure chests, they offered him gifts of gold, frankincense, and myrrh. 12And having been warned in a dream not to return to Herod, they left for their own country by another road.

13Now after they had left, an angel of the Lord appeared to Joseph in a dream and said, “Get up, take the child and his mother, and flee to Egypt, and remain there until I tell you; for Herod is about to search for the child, to destroy him.” 14Then Joseph got up, took the child and his mother by night, and went to Egypt, 15and remained there until the death of Herod. This was to fulfill what had been spoken by the Lord through the prophet, “Out of Egypt I have called my son.”

16When Herod saw that he had been tricked by the wise men, he was infuriated, and he sent and killed all the children in and around Bethlehem who were two years old or under, according to the time that he had learned from the wise men. 17Then was fulfilled what had been spoken through the prophet Jeremiah: 18“A voice was heard in Ramah, wailing and loud lamentation, Rachel weeping for her children; she refused to be consoled, because they are no more.”

And in these compact four paragraphs, Matthew inaugurated (although he didn’t realize it, obviously) an entire liturgical season, one called “Epiphany.”

Depending on how you look at it, Matthew also inaugurated a way of life.

Epiphany means, literally from the Greek, “to make manifest.”

There are all sorts of reasons why this Magi event marks the beginning of Epiphany, but vis-à-vis the three (or pick-a-number-any-number) kings, it is said that they, being Gentiles, were the first non-Jews to come to the conviction that Jesus was the Messiah: they had a revelation, or it was made manifest to them, that the Son of God had been born.

The entire season, then, is filled with texts and tales of revelations of people, both Jews and Gentiles, who saw manifested in Jesus a new glimpse of God, a new vision of who God is, and a new way of being in the world.

This year, three things caught my particular attention about the passage and the season:

1) The historical parallels between their time and ours are striking: systemically extreme poverty and extreme wealth, paranoid and power-hungry rulers, refugees fleeing for personal and political safety, and a desperate need for hope;

2) The Magi gave Jesus tangible gifts (we can only really speculate on the reasons or symbolism for each): Gold (perhaps to honor his kingship), Frankincense (a medicinal herb and incense used in high worship), and Myrrh (an essence used both to treat wounds and to anoint, and even embalm, the dead);

3) The Magi gave Jesus—and his family—an intangible one: they warned the family of Herod’s malevolence, so that they could flee to safety.

This Epiphany, then, I am moved to wonder not just about the epiphanic gifts that the Magi gave Jesus, tangible and intangible, but what corresponding gifts we can offer him now, over 2,000 years later, in an era that is more like Jesus’ than we might realize, or want to.

In other words, how can we make like modern-day Magi?

Here’s the thing: if we say we belong to a historical faith, then we say that faith happens in history—including history-in-the-making.

There is no occasion or moment when people of faith aren’t called to learn from our faith, and called to act out of our faith.

In this troubling and disorienting day and age of Donald Trump, Christians are being called understand our faith and the world around us all the more, and to engage life more completely by way of our faith claims and commitments.

This text from Matthew, and this season of Epiphany, highlights why.

Any regular reader of this blog knows that I am passionate about my opposition to this President and his agenda.

Trump is no Cyrus, as people claim him to be: he’s much more like the paranoid, power-hungry, malevolent Herod about whom we hear in Matthew’s text above.

These same readers also understand that my political views are based entirely upon my faith.

In case there is any question about my convictions, let me be clear: I am convinced that there is nothing about Donald Trump’s agenda that matches that of Jesus’.

(Even those who point to his anti-choice views on abortion—for many the primary stated reason for their continued endorsement of him—miss that his present views on the matter are demonstrably only politically expedient. Not only that, but one can not be ostensibly pro-life and simultaneously overlook, relativize, or dismiss the deaths of two children at the border in US Custody; the attempted dismantling of Obamacare which provides access to life-saving medicines and procedures to those who otherwise cannot afford them—already causing unspeakable harm; the decidedly non-pro-life effects of the death penalty; the dismemberment of Jamal Khashoggi; the terrifying truths about the death-dealing effects of unchecked climate change and global warming; the reductions to SNAP which prevent even children from basic nutrition; and the truth that legal abortion and pro-choice policies actually save more lives [including that of unborn children] than [when it was and] were abortion illegal).

I’ll say it again because it is true:

There is nothing about Donald Trump’s personal or policy agenda that matches that of Jesus’.

We as people of faith are compelled and, indeed, called to actively reject Trump and Trumpism in the name of our Christian faith, while advocating, embracing, and rejoicing in something entirely different.

The advent, life, death, and resurrection of Jesus (not to mention the Jewish tradition out of which he came) must mean something, it must have some relevance to our day-to-day lives.

It must matter as history is being made, as it is with every moment in time.

If not, then faith is nothing but a hobby indulged only when you have free-time and mood to dabble, or it is but a historical (and somehow irrelevant) artifact, or it only about “me and Jesus.”

Faith in Jesus is none of those.

Given what we know of the baby-Jesus-grown, and knowing that latter text of Matthew (i.e., Matthew 25:31-46, especially verse 40: “And the king will answer them, ‘Truly I tell you, just as you did it to one of the least of these who are members of my family, you did it to me…’”) which teaches that Jesus is in all people, especially the Least of These, the season of Epiphany asks us, now, these questions:

Do we believe that Jesus is the Christ?

If so, what sort of gifts could we present to him to pay our own respects?

How, in short, can we make like the Magis?

We, too, have tangible and intangible possibilities at hand, here and now.

As for me and my house, we begin each Epiphany like this: 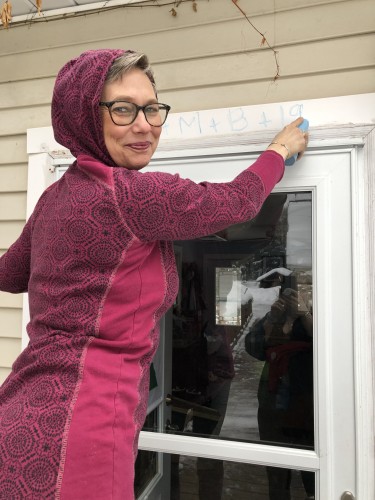 It’s a long-standing tradition to “chalk the door” with the initials of the three wise men (C for Caspar, M for Melchior, and B for Balthazar), which also happily stand also for Christus mansionem benedicat, “May Christ bless the house.”

Every entry into our home, all year long, is a reminder of the Magi gifts of blessing and of warning (and therefore of safe refuge) to the Christ-child and his family.

It’s also a reminder that our home isn’t our home, but is Christ’s home, and is itself a blessing and a refuge for us and others who need a safe and joyful place.

This Epiphany, and all year long, make like the Magi: make manifest the reign of God by gifting Jesus, and gifting Jesus to the world.

Read Anna’s other blogs on Epiphany here, including these highlights:

This Little Light Leads Me Home By Another Way