What Could I Do? Do Your Being.

It’s been a rough couple of weeks, to be sure, in the news here and abroad.

It seems as if each new dawn brings a revelation of another atrocity, injustice, despair, and insult to our humanity: beheadings and shootings and genocides and suicides.

I think I sense a feeling of helplessness too, a weariness even, tethered to the news tickers of the day.

The headlines tell of events that seem so far beyond our control, let alone beyond our comprehension.  We are left to wonder whether our protests, be they thundered in the streets or in letters to politicians or in Facebook posts or on blogs, accomplish anything other than a vent in vain.

But the question–and the quest–still haunts me.

What could I do in the face of Ferguson–which isn’t really only about Ferguson.

What could I do in the face of the children at the border, the tensions in Gaza, the beheadings by ISIS, the kidnappings in Nigeria, the escalations in the Ukraine, the water shut-offs in Detroit, the homeless children and adults in Sioux Falls…

What could I do?

So then I remembered that at Fortune Lake Lutheran Camp a few weeks ago, leading an adult study on time for a week, I scrawled out some quotes (of others!) that I thought were pretty darn good.

Like this one (please pardon both my shoe and my unvacuumed floor): 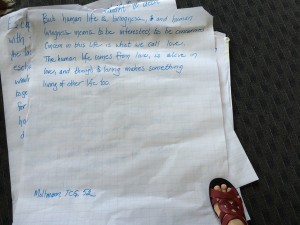 “But human life is livingness, and human livingness means to be interested, to be concerned.  Concern in this life is what we call love. The human life comes from love, is alive in love, and through loving makes something living of other life too.”  Jürgen Moltmann, The Coming of God, 52.

Or this one, also from this same book, also with the same apologies for my toes and carpet: 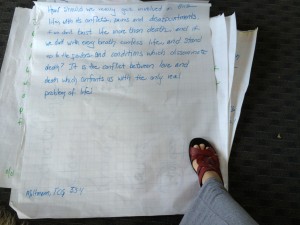 “How should we really get involved in this life, with its conflicts, pains, and disappointments, if we don’t trust life more than death, and if we don’t with every breath confess life, and stand up to the powers and conditions which disseminate death?  It is the conflict between love and death which confronts us with the only real problem of life.”

The claims of despair, of helplessness, and of shock clamor for our attention and even our allegiance.  Sometimes, we give in, and figure that we can’t make a difference anyway, so we shut off the news, shut off our hearts, shut off our minds.

But Moltmann thinks that’s messed up, and, for what it’s worth, I agree…though humbly, because I realize that I’m not in his league (I am for sure, though, in his debt.)

Moltmann thinks that’s messed up because people of faith are claimed by something else: love and life.

Love and life can’t help but to protest hate and death.

By their very be-ing, it’s what they do.

Even our votes, for example, can change these headlines, or our automatic payments to organizations like Bread for the World, or our willingness to dedicate some time to learn about different religious groups, or world geography, or post our views on FB (and yes, studies show that our Facebooked and Twittered opinions can change minds).

But think back to that initial cartoon I mentioned, the one I couldn’t find.

Trite and cliché though it might be, if you were to change the text in the first bubble, and put instead a candle, just a glimmer of light on an otherwise darkened globe, you would know that while the rest of the world might be under an inky blanket, at least the area surrounding that single flame is just that much brighter.

Now imagine the second frame, candles replacing words of all those words of expected futility.

The whole world would be just that much brighter.  Quite a bit brighter, actually.

That is, rather than thinking of doing something, be who you are claimed to be, or, depending on how you look at it, be who you claim to be.

Let the light of love and life be the protest.

Embody, make incarnate, personify, concretize, represent, and for the snobbier among you, reify and hypostatize this prayer, this prayer that is so powerful, and whatever else you might think did not come from St. Francis of Assisi.

O Divine Master, Grant that I may not so much seek
To be consoled as to console;
To be understood as to understand;
To be loved as to love.
For it is in giving that we receive;
It is in pardoning that we are pardoned;
And it is in dying that we are born to eternal life.