“For we hold that a person is justified by faith apart from works prescribed by the law.” Romans 3:28

Sunday, October 29 is Reformation Sunday, a High Feast Day of sorts in the Lutheran Tradition.

This year, we mark the 505th Anniversary of the day, this auspicious moment when German monk and scholar Martin Luther published a…few…objections to the practice of selling “indulgences.”

These, of course, were pieces of paper given out by Catholic priests of the day, notes which promised that any post-death misery brought on by sinfulness would be, to one degree or another, lessened.

But the Church wasn’t just giving these indulgences out like Reese’s Peanut Butter Cups and Snickers Bars on Halloween.

Nope: any sinner wanting to stave off or tamp down eternal judgment had to pony up some pennies—the more the better—to earn God’s grace.

To brother Luther, this practice seemed like a heretical if not well-played racket.

So Luther, never one to mince words, decided to point out 95 ways that the buying and selling of grace was theologically and biblically skiddelywompus.

Here was what got under his craw:

When you get right down to it, it’s a matter of definitions, and they aren’t even theological.

A reward is based on merit.

That’s not to say that there isn’t theology in play though.

Luther was a biblical theologian, and after spending more than a little time in Scripture, Luther (and, now by extension, Lutherans) came to believe that the biblical witness makes it clear that ultimately, God doles out grace rather than rewards.

This discovery is a super fortuitous thing, because when you get right down to it, no one could ever have enough merits to earn any reward from God anyway.

Now, this thesis of Luther’s was, and 505 years later remains, a hotly disputed point among various religious traditions, but to make it, Luther only had to turn to passages like the Romans text above, a passage happily assigned for Reformation Sunday.

”For we hold that a person is justified by faith apart from works prescribed by the law.”

Lutherans are all over this take.

We hold this banner high and proud and with huge sighs of relief: there is nothing that we can do to “save ourselves” from our sinfulness or from God’s judgment.

To say otherwise a) renders Jesus’ death and resurrection for naught; and b) renders everyone totally and permanently without hope and screwed.

To trust the idea that works “make up a difference” implies that an intangible and unsullied part of us can carry the rest of our sloppiness through.

But in order for that to be true, there would have to be a sliver of purity within us not in need of redemption, some part that urges the messy parts of who we are, the potentially irredeemable parts of us, to engage in good works—be they indulgences, acts of piety, generosities, etc—to make up the difference and to prove our worthiness to God.

An E for Effort and (if God’s paying attention) Eternity.

Buuuuttttt…mind-bending though it is, at the end of the day, these good works themselves would be in need of redemption!

Their expressions would not be altruistic, but actually be veiled acts of self-preservation rather than pure manifestations of one’s faith and desire to follow God.

In some measure and to some degree, we’d do them to prove to God that we are deserving of heaven and not of hell, as if God trucks in rewards and not in grace, and as if God wouldn’t know that, if we’re honest with ourselves, at least a teensy weensy part of the drive to do good and be good is the hope of being spared rather than scorched.

So that part bugs us Lutherans, yes it does.

And very much along this line, we don’t like equating God to the Big Santa Claus in the Sky, a divine figure with lists of who is naughty and nice.

Luther and Lutherans know that life is messier than those binaries, and God is more nuanced, not to mention charitable, than Santa.

Bonhoeffer, the closest we Lutherans have to a saint, wrestled with this question of the dualistic Good and Bad, not to mention the matter of grace over against works.

His answer—and his execution—was grounded in radical trust in the grace of God over against his own futile efforts to earn it.

But we don’t need to be faced with the stakes of Auschwitz to know something of the wrestle too:

So Luther named all that, and Lutherans claim all that:

Because this theological thrust is so significant to our history and our identity, Lutherans have come to equate the gospel with the statement that our sins are forgiven.

Ask most any Lutheran, lay or otherwise, to preach or identify the gospel, and they will proudly proclaim that we are saved by grace and not works.

We are justified by faith.

And this makes sense, right, because Martin Luther radically re-oriented believers’ trust, wrenching it from faith in ourselves and our own works and to faith in God and God’s mercy.

And this is all right and good and true.

But the trouble is, right and good and true message that the forgiveness of sins is, it isn’t the gospel.

The gospel is that Jesus is risen.

Sinfulness is a form of death (obvs), but we are freed from it because Jesus is risen, rendering any death, due to sin or otherwise, ultimately impotent in the face of God’s triumph over it.

See, it’s not like there is some asterisk that hovers next to Jesus’ resurrection leading to some fine print statement that “*some conditions may apply.”

That tendency of ours to trust in grace has made Lutherans almost allergic to works.

We are so acutely aware of how easy it is to fear that God is watching and taking notes, and therefore how a person could be tempted to do a good work in hopes that one would earn an extra notch in our ‘pro’ column, that we have tended to misunderstand grace to mean this:

Which, spoiler alert, is malarky.

Lutherans have leaned on grace so much we’ve become prone.

In fact, there’s even a name for it: Lutheran quietism.

We remain still when we could be, should be, at work, stewarding God’s reign in the world.

This brings us to the second text above, the verse from Psalm 46: “Be still, and know that I am God.”

I have long confessed, at the risk of being accused of irreverence (and, to be fair, of actually being irreverent) that I am not a fan of this verse.

But for two reasons, this verse has gotten under my craw.

First, I have had these words said to me—offered in good faith and as good advice—in times when I have been beyond overwhelmed, tapped out, and unable to find a way forward.

These folks meant it well.

But the fact was, had I been still in those times, especially as a single mama of two small and one very wounded children, nothing would have been done by nobody, including by God.

Second, stillness been a dangerous partner to the Lutheran tendency to avoid works and instead to be quiet and trust in God.

The train of thought goes like this: if we don’t have to do any works, because God’s grace prevails, and we do have to be still, because God’s got this, then we can, with God’s blessing, do nothing.

Turns out, though, that the word rendered “still” might not mean what we think it means.

Rather than bidding us to be inert, instead, the word (רפה) rapha is perhaps better understood as “be weak,“ or “be vulnerable,” or “be open,” or “let go.”

In fact, the plural has been used to refer to “the place of the dead.”

See, now I can totally get behind that sort of understanding of ‘still.’

It’s a stillness that is brought about by humility rather than passivity.

It’s a stillness that acknowledges death, but refuses to cede power to it, because we know that God is God, and that this God is a God who brings life out of death, who does not deny our reasons for fear, but who bids us to rise through and above the fear even so.

This Reformation Sunday, one could and should dwell on the grace of God which meets us in the moments of our greatest depravity.

And there is gospel to be found there, to be sure.

If it weren’t for that radical insight, that transformative news that we are:

saved by grace and not by works;

chosen and even as babies sealed by the Holy Spirit in our baptisms;

we would have no reason to remember Luther, to celebrate Reformation day, or to live without anything but dire fear of God.

But as grateful as we can be about Luther’s kicker of a theological claim, it is possible that, as people of the Reformation, we could also use this opportunity to reform our definition of the Gospel, and of how we steward that gospel in the world.

It is possible to consider that the gospel, as we’ve typically understood it, is pretty narrow.

So maybe we could use this Reformation Day to reflect on the possibility that:

Paul was right: we are justified by faith and not by works.

The writer of Psalm 46 was right: we can rest in the trust that we are finite, and that even in the places and times in which we are dead, God is present and active.

Luther was right: we cannot save ourselves, but are already saved.

But this proclamation is also right, and more right than any of these other claims: Jesus is risen.

As followers of Jesus, we trust that death is powerful but not most so; that we follow Jesus into places of death to steward life; and that nothing, nothing in the greatest or in the least, can separate us from the love of God. 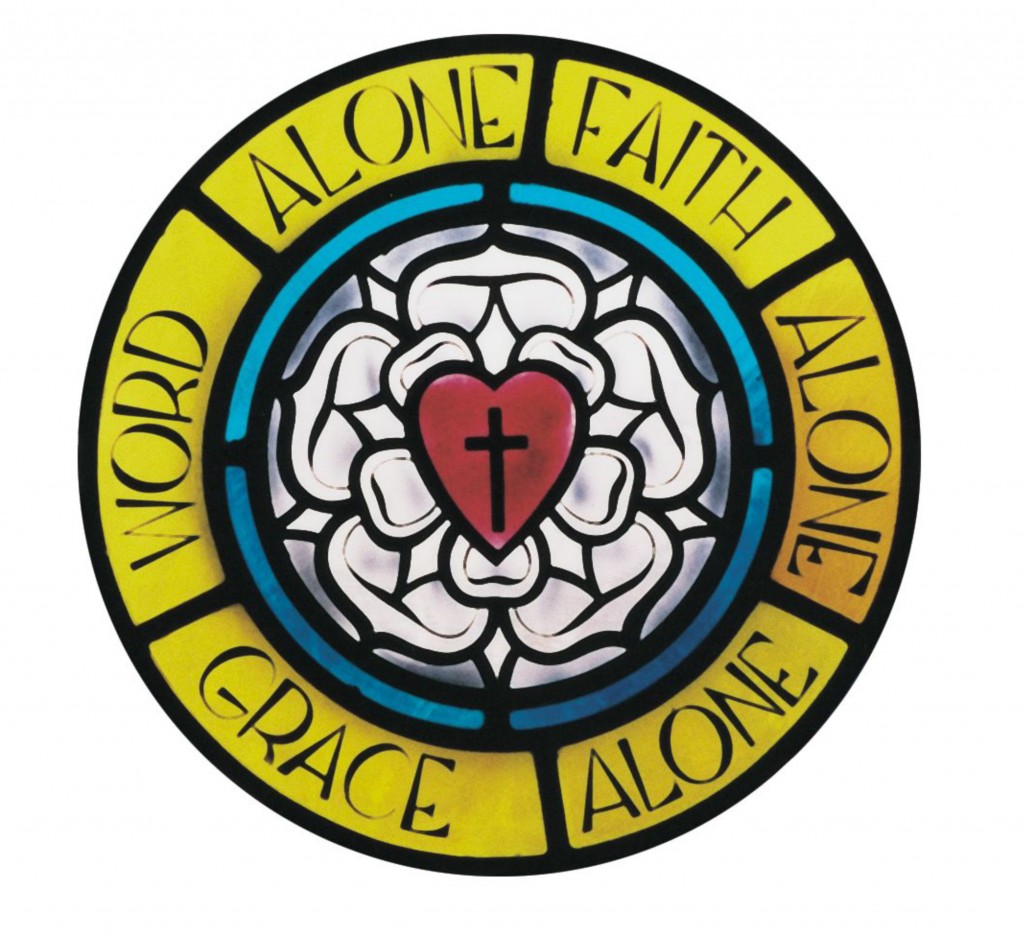 (To see me stand even higher on this soapbox, pick up my book I Can Do No Other: The Church’s Here We Stand Moment, published by Fortress Press).