As the calendar months and weeks and soon days keep flipping toward The Day, I am grinning because I can’t quite shake the memory of when I was six years old, and my parents had packed up our things and my sister and me, and we hopped in the car to drive to my aunt’s for her 50th birthday celebration.

I could not wrap my mind around someone being 50 years old.

After mulling the concept for an hour down the road, I finally said, completely astonished, to my parents in the front seat, “So….that means that Auntie Es is a half century old, right?!”

They laughed and made me promise on the spot to ask her myself, as soon as we got to the party.

I’m already planning on raising one to her in absentia, and in belated apology and solidarity.

So biblically, a Year of Jubilee was set aside every 50 years (though there is some argument about it being every 49–doesn’t matter, because regardless, I’m totally in the zone) to allow the land to rest, the slaves to be set free, and debts to be resolved.

There’s quite a beautiful piece on it that you can find here through the Episcopal Church website.

The celebration was announced when someone blew through a shofar, a ceremonial ram’s horn, on Yom Kippur, the Day of Atonement.  “Ram” is  “yobhel” in Hebrew, which is one etymological source for our present word “Jubilee.”

Happily, later, in Latin, the coincidentally sounding word iubilare, meaning “to shout with joy” arrived on the scene, from which we get the word “jubilation,” which certainly has carry-overs to the sense and sound of Jubilee. (You can geek out on the etymologies here)

Upshot is that the Year of Jubilee is when the ideals of how we should be in relationship with each other are lived out in stark contrast with the actually of how things are.

It’s both affirmation and protest, really.

My dear friend turned 50 in February, and before she did, I asked her how she was feeling about the onset of 50+.

She’s absolutely got a point.

And she told me about how she and her husband, who turned 50 just after she did, were taking a long-overdue vacay, just the two of them, to celebrate the landmark event in heat and sand and ocean.

It’s a perfect idea, and just as it should be.

“Well…I’ve got a bit of a different take on it, I suppose,” I said.

And then I mused a bit about how I know that dates are arbitrary, on the one hand, but they also give a person markers to notice things.

And I notice that my late husband didn’t get to hit 50.

So there’s a bit of…what.

But…reflectiveness? contemplation? quiet gratitude for every moment I’ve got?

Point is, I’m looking at 50 differently, that is, as a woman whose husband died, than I would have if he hadn’t.

Not more than a week later, and during my almost-weekly wine night with another dear friend, we got to talking about this impending birthday of mine, and I told her about this conversation with my other friend, and then told her that I’m not going to any ocean, of course, but that maybe I should do something about it.

Complicating matters is that I am an introvert, all evidence to the contrary.

I like people…for short amounts of time and if there’s a nap or a quiet puzzle time guaranteed shortly thereafter.

But still, maybe exactly because my happy-about-50 friend is right (and at least by a metric of having been through a wringer or two of my own, one could argue that I also deserve 50), and because it’s not right that my late husband didn’t get to 50 (by any metric, he deserved to have hit 50 like the rest of us, not least of all because of these amazing kids of his), and because there is too much reason for lament, and who doesn’t need a chance for some celebration thes days, and because even introverts need people, Sara and I figured that I should mark the dang day.

So, we decided to have a gathering here, at my home.

It’s the “If you can read this invite thanks be to God and that’s worthy of a party Party.”

It’s the “One can argue nobody deserves 50 and it’s all grace Party.”

It’s the “We have all been through the wringer and it’s not what God wants so if you’re broken and like broken people come and hang out with God and God’s people so we can share some defiant jubilation together Party.”

The inspiration for any of this comes from this above-referenced biblical notion of Jubilee.

See, in Scripture, in the year of Jubilee, those who had suffered from want were reminded that God provided the land to all people, and not just to the wealthy; its bounty was meant to be shared (Leviticus 25: 6 says that the Jubilee “….shall provide food for you, for yourself and for your male and female slaves and for your hired servant and the sojourner who lives with you.”).

Those who had suffered from grief were assured that God’s intention was for peace and health and joy for all, and that God works in real time to seek to bring that about (Is. 61: 1-2 announces that “The Spirit of the Lord is upon me, because the Lord has anointed me to bring good tidings to the poor; he has sent me to bind up the broken hearted; to proclaim liberty to the captives, and the opening of the prison to those who are bound; to proclaim the day of the Lord’s favor, and the day of vengeance of our God; to comfort all who mourn,” quoted by none other than Jesus in Luke 4, straight after a little 40-day tête-à-tête with the Devil, when he read from the Temple Scroll…adding, after sitting down, that in him, these words had been fulfilled.)

See, we all know, just as the ancient Hebrews did, what (sometimes unfortunately) is.

We also know what should be.

And what should be is a collective sharing of gladness that we are here, a collective comforting of those who are missing people who aren’t and that which isn’t, a collective thanksgiving for people who didn’t hit the age they should have, and a collective rejevuentation of efforts to be ambassadors of Jubilee.

Joyful defiance is what Jubilee is.

So, let’s have ourselves some of that together.

So, know that, on Saturday April 6, from 11 a.m. to 3 p.m. (note, extroverts amongst us, not 11 p.m. to 3 a.m.), you are welcome to 808 Stanley Road here in Two Harbors to celebrate that you are still here, that the rest of us are too, and then to take some of that jubilee with you down the road to extend to others.

RSVP to anna@omgcenter.com with the heading “Half-a-Century Jubilee” so we can make sure that we have enough edible jubilation to go around.

And if you can’t come, we’ll raise one to you, glad simply that you are.

Plus, winter is ending.  Spring is coming. That alone is reason for Jubilee. 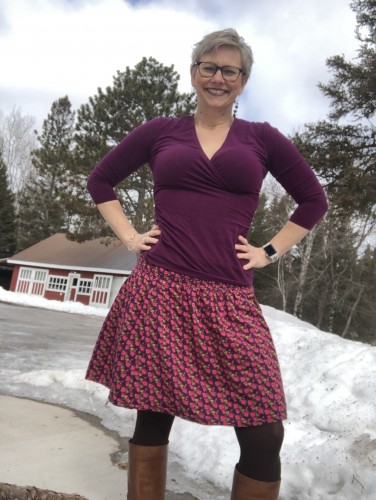 (P.S.  If you and I went to High School together, a certain Andrew and Christine and I are planning a shindig for later in the summer too: come for both celebrations, or save the huzzah-ing up for that shared Our-Whole-Class-Is-Hitting-50 jubilee!)