Some time in the last week or two I was listening to Minnesota Public Radio, and a story about “legacy letters” came on.

You can find it here.

The piece began with this intro:

So, how many of your great grand parents can you name?

We all have 8 great-grandparents, but most people can only name 2 or 3 at most.

That means the odds are your great grand-children won’t know your name, let alone about your life, your thoughts or your memories.

“Well, dang,” I thought to myself.

”That can’t be right on any level.”

So I tried to prove the story wrong.

Ok, so I was named after her…

But I still get credit for it, obvs.

My maternal grandfather’s parents were…(*suddenly realizing I would be proving the story right*)…absolutely positively no clue.

My maternal grandmother’s parents were…Elsberry…their last name was Elsberry…I think my great-grandmother had a pet name?

At best I get only partial credit for that.

So my grand tally is 1.5 great-grandparent names out of eight, and that’s pretty much because the kids and I visited Elsberry, Missouri, named after an ancestor on my mama’s side, and as for my paternal great-grandma, I was named after her, and have a cookbook with her picture and name on it that I see on a very regular basis. 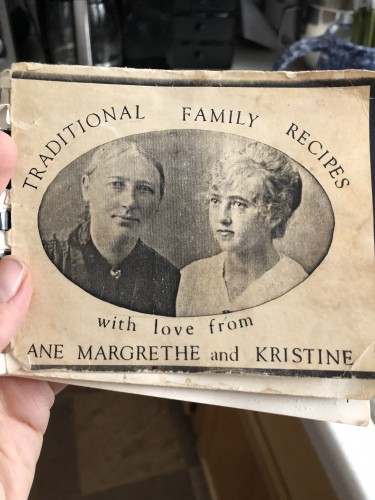 The question, though, intrigued me, so I looked up the broadcast, and discovered that it was produced via a news program that “seeks to cover positive trends and inspirational stories.”

I find that an bit funny, as this particular episode reminds a listener of Qoheleth’s words in Ecclesiastes 9: “But whoever is joined with all the living has hope, for a living dog is better than a dead lion. The living know that they will die, but the dead know nothing; they have no more reward, and even the memory of them is lost.“

But while one can argue that the intro could have been a bit more on the “positive” and “inspirational” side, the intention of the subject of this show, Suzanne Pekow Carlson, is positive: it’s to gift the future with a memory of the past.

Ms. Carlson’s mission began when her mother was afflicted with pancreatic cancer—my mother died from that too, so my ears perked up when that tough tidbit was mentioned.

During her mother’s last days, Ms. Carlson began to wonder about how to ensure that her mother were remembered, and then she stumbled on the notion of a ‘legacy letter.”

Her mother had enough strength for just three paragraphs of one before she died, an experience which gave Ms. Carlson all the more reason to encourage other people, before their dying days, to also craft a legacy letter, namely “a place to state your beliefs, your values, your advice and how you want people to remember you.”

Because, to circle back to the beginning of the show, not to mention Qoheleth, apparently people won’t remember you, specifically you, so much, otherwise.

New Year’s Eve has never been a big thing in my family.  We’ve usually celebrated it by fixing up yummy appetizers to nosh on throughout the day, and we watch a few fireworks from all over the world usher in the new year, and I raise a Manhattan, but we often call it a wrap by, oh, 10:30 or so.

New Year’s Day, however, is more our style: a yummy cozy breakfast (on the menu this a.m.: vanilla cardamom scones, fresh sausage patties, scrambled eggs with herbs and cheese, and fruit) and all-day-jammies while we watch the Rose Bowl parade.

For all the hoopla, both celebration-and-end-of-tax-year-wise, the actual date of New Year’s Day, celebrated on January 1, is both arbitrary and intentional.

For political reasons, not least of all, Julius Caesar took it upon himself to establish a uniform calendar.

Because the Roman God Janus (after whom January is named) had two faces, JC (the Roman ruler, not Jesus Christ) felt that it would be appropriate to begin the official annual calendar on January 1; it’s quite lovely symbolism to have one face looking back, and one looking forward (You can geek out more about this history here).

The occasion makes lots of us tap into our inner Janus, and glance back and forward on these days, and some of us even have a habit—or at least really good intentions—to craft New Year’s Resolutions based on what we see, and on what we envision.

New Year’s Day may be an arbitrary moment, but it is a moment nonetheless on which to take stock, to evaluate, to re-evaluate, and to commit to something new.

I’m not a huge fan of bucket lists, to be honest.

I get their intent, but I can’t shake the notion that there’s a latent-to-not-so-latent anxiety that drives them: you never know when you’ll croak, so better jam as much life in before you do (see live dog/dead lion reference above).

Focusing on a legacy, though, that has a different sense to it, and, etymologically, it turns out for good reasons: the word ‘legacy’ comes from the word, legacie, which meant a “body of persons sent on a mission,” and even held the notion of designating someone as a representative “by a last will.”

A legacy, that is, is both personal and communal.

When you are gone (either because you are sitting on your throne and instruct others to go elsewhere to do your bidding—happens to me all the time—or you die), others extend you, they act in your stead, they represent you and they carry out your wishes.

Your life isn’t just yours.

You influence and shape other people.

Even when you do not know it, and never will, your life matters.

I’ll never forget that, at my late husband’s memorial service, the church in Regensburg, Germany overflowed with people, most of whom I did not know.

It was a stunning thing for me to be surrounded by people whom I did not now, but whose lives my late husband had touched.

Later I discovered that shops closed down in and around town, just so that the store owners and workers could pay Bill their honor: he affected others, walking around almost every day with little Karl and tinier Else, showing them the sights and sounds of beautiful Regensburg, and always with such clear love and delight for his two babies.

He was a walking fixture of Regensburg, a figure of paternal-love-in-motion who, unbeknownst to him, gladdened, and moved, and inspired people.

Humble Bill would have been stunned.

He had no idea that his life impacted others to this degree and for these reasons.

They didn’t even know his name.

I will never know theirs.

Who was I last year?

Is it who I am called to be?

What, in this New Year, will make me more the best of me?

See, a person can’t leave a legacy of oneself if one doesn’t know oneself.

I think that the idea of a legacy letter is quite beautiful.

I think of how I treasure the stories that my Grandma Madsen passed on to us in the cookbooks and her autobiography, and know that they are already being passed on to daughter Else, who will pass them on further, no doubt.

And I love the notion of holding a letter that was written by my ancestors to me, even though they didn’t know me, to share with me—and with all of their descendants—to say, “This is important. I learned this. I valued this. This shaped me. Therefore it shaped you. I don’t know you and yet I love you.”

Perhaps, on this New Year’s Eve Day, we can consider another form of legacy, an embodied one.

For people of faith, your legacy represents not just you, but God, and God’s intentions for you, and for the world.

Your legacy, that is, is about you, but not just about you: it is mostly about God’s intended legacy for you, and for others.

Qoheleth was a bit cranky: sort of like an ancient Eeyore.

But he wasn’t entirely so.

Qoheleth saw that God willed not just our humility (“Vanity of vanities! All is vanity…” Ecclesiasties 1:2), but also our delight—our delight in good things, and in each other, and even in our work.

Right after the most famous passage in Ecclesiastes (“For everything there is a time…” Ecclesiastes 3:1-8), Qoheleth shoots us this:

9 What gain have the workers from their toil? 10I have seen the business that God has given to everyone to be busy with. 11He has made everything suitable for its time; moreover, he has put a sense of past and future into their minds, yet they cannot find out what God has done from the beginning to the end. 12I know that there is nothing better for them than to be happy and enjoy themselves as long as they live; 13moreover, it is God’s gift that all should eat and drink and take pleasure in all their toil. 14I know that whatever God does endures for ever; nothing can be added to it, nor anything taken from it; God has done this, so that all should stand in awe before him.

May this new year be, for you and yours and those whom you will never know but with whom you will leave your legacy, a year of new reflections, new beginnings, new possibilities, new self-awareness, new delights, new transformations, new realizations, and new hopes, and may it be blessed by the God who makes all things, not least of all this very year, new.

Check out the last couple of OMG blogs, while you’re at it!

O Little Town of [Fill In The Blank]

The Good News (No, Really) According to John the Baptist and Luke