Of Dominant Men, Subversive Courage, and My Very Fine Woodpile

So I had to deal with a bit of a firewood kerfuffle this past month.

A fellow who had promised me dry wood to heat my home this winter, well, shouldn’t have, come to find out about three weeks ago.

For those of you in warmer climes, that’d place this said kerfuffle right before the weather turns awfully brisk here in the North Woods.

Turns out that this man’s word wasn’t quite as good as his talk, and so there had to be no small amount of last-minute scrambling on my part to make sure that I had enough dry cords for my stoves to keep my family warm come the advent of cold.

It’s advented, as an aside.

One of the many irritating things about the whole mess was that for a change, I’d actually been thinking ahead.

Like, I’d thought we’d had this thing sewn up in May.

For the record, we still had snow on the ground from last winter this past May, so I was feeling fairly pleased with myself for mentally flipping my calendar from In-View Snowpile Late Spring to In-Line-of-View Snowpile Early Fall.

So in the last two weeks, I’ve been frantically fanning through the locals, who gave me all number of names of dry-wood-in-the-know folks.

I called every one, and soon learned that I wasn’t the only person scrambling for dry wood this late in the seasonal game.

So I was getting a bit…concerned.

But then I got the name of a gentleman who, I was promised, knows forests and lumber and firewood like no other, and moreover, I was assured, I could trust the guy.

So I called him up.

A day or two after we spoke on the phone, the man just sort of showed up.

As I later described this quite large fellow who appeared at my front door, and walked in, and took my offered cup of coffee and sat down, our exchange student said, “He sounds like Hagrid.”

And she was right, right down to the man’s earthy kindness.

Upshot is that after an hour of schooling me on the size of logging truck beds and how many ways to size up a cord and why it’s not about how old the wood is it’s about the moisture content, he finally walked me around my own forest and made the point (now obvious to me like it was to him as soon as he set foot on our acreage) that  “Ma’am, you got yourself enough dry wood’ll last ya for decades’n more. Just need to get yourself a 4-wheeler to haul it out. You don’t need to pay no one for wood til kingdom come.”

And now not only can I sleep well knowing that I have wood right here to keep us snug and warm, I also have reason to get me an ATV.

This gentleman gave me a mess of stories, in just an hour, and a couple of days later he also rustled up a mess of dry firewood that just appeared one evening in a pickup truck, and I am awfully grateful for his help.

One exchange, though, right after he sat down with his cup of Joe and me with mine, as we were talking about what happened with this first promise of dry wood with this first fellow, has stuck with me for any number of reasons, not least of all because of this last wrenching week of Dr. Ford and Judge Kavanaugh.

My surprise new friend said, “Ma’am, whatcha need yourself is a dominant man. You call some logger and you say you need 13 cord of dry firewood and they promise you up and down that you’ll get 13 cord of dry firewood yes ma’am but what you’ll get is 10 cord of wet. You need a dominant man around here to make those sort of calls on your behalf so that you don’t get yourself in fixes like you just did.”

He wasn’t describing how it should be.

He was describing how it is.

It’s like people who look to justify the existence of poverty by repeating Jesus’ words “The poor shall always be with you.”

Jesus wasn’t condoning that reality: he was implicitly condemning it while naming its awful truth.

The poor shall always be with you, dammit, and some things in my life would be easier if I had a dominant man around here, dammit.

Other things would not be easier, of course.

So this past week, women have been triggered coming and going.

We have been triggered by reminders of our own experiences of sexual assault, and we all have some form of one or more.

We have been triggered by the all-white-male GOP panel, a facade all the more obnoxious when it attempted to hide behind the sole woman on their ‘side,’ placed in that room only as their buffer.

We have been triggered by the dismissal of Dr. Ford’s allegations, by the even-if-that-were-true-boys-will-be-boys, by the this-was-long-ago-and-so-doesn’t-matter, by the she-must-somehow-be-responsible.

That it’s just how it is.

See, this week also triggered for us a reminder that, unlike my Lumberjack friend and unlike Jesus, society and the powers that be were saying both that not only is this how it is, but it is how it should be.

Men are dominant, and that’s how it should be.

But women are crying “Malarky…” or variations on that theme.

Mothers are raising their voices as they raise their children, for those are messages that we have no intention of our daughters or sons believing are true, that’s for damn sure. We’ve lived that reality for too long and it will stop with us.

Survivors are naming names, for their assault has been unnamed and unnamable for too long.

We will no longer be dominated by the threat of attack, by the attacker, by the fear of coming forward about the attack.

In related news, in an interview for the On Being blog, Old Testament theologian Walter Brueggemann takes on the notion of dominance, and the “public transformation” when dominating powers are subverted by courage.

Q: How do we find inspiration in the Bible for strength in protest or activism?
A: It is in the narratives and the psalms. Beginning with the Exodus narrative and the Elijah narrative and the Jesus narrative, they are all storied about public transformation that happened by courage of uncredentialed people. These kinds of narratives feed our imagination and give us energy and courage. As the civil rights movement of the 1960s and ‘70s understood, singing is a way to keep your nerve. If you think about the Song of Miriam or those dangerous songs (many of which are in the mouths of women), we are invited to join that kind of singing which is a refusal to accept the dominant definitions of reality. Such singing and storytelling is an insistence that there is another way to experience the world and there is another way to act in the world. These are very important models and authorizations for us. [Bold/underlines mine]

Dr. Ford is, to be sure, credentialed. She has degrees that specialize in precisely the sort of trauma she herself experienced.

But while that matters, of course, her expertise in the field is irrelevant to the bigger truth: generally, women who say that they have been assaulted—emotionally, physically, and/or sexually—are viewed as in-credible. As not-credible. As having no credence.

So were the women in the elevator who confronted Jeff Flake.

So was Anita Hill.

So is any woman who has been assaulted and wrestles with what to do with the assault: to tell, to stuff, to metabolize, to press charges, to face the return charges against her character and integrity if she does.

They are all credible, and all courageous.

What happened last week is that women were reminded that (to borrow Brueggemann’s language) not only is there a dominant version of reality.

There is a subversion of it to be had, and had because this might be how things are, but it is not how they should be.

Women are now vocally subverting the dominant notion that we are objects, we can be objectified, and we can’t object.

The same masculinity that is so toxic for women is, of course, also toxic to men.

New Testament scholar Mark Allen Powell once said that Luke’s Gospel message is that just as the poor should be redeemed from their poverty, so too should the rich be redeemed of their wealth.

Indeed, perhaps it’s that we need a new framework for thinking about ‘domination,’ one that is far more in keeping with the Genesis notion of domination.

Take a look at Genesis 1:28: “God blessed them, and God said to them, “Be fruitful and multiply, and fill the earth and subdue it; and have dominion over the fish of the sea and over the birds of the air and over every living thing that moves upon the earth.”

Of this passage, Brueggemann says that, “the task of ‘dominion’ does not have to do with exploitation and abuse.  It has to do with securing the well-being of every other creature and bringing the promise of each to full fruition,” (Brueggemann, W. (1982). Genesis. Interpretation. Louisville: Westminster/John Knox, 32). (Italics mine).

Now there’s a notion of domination I could invite to dinner; someone who has as an agenda to “secure the well-being of every other creature and [bring] the promise of each to full fruition.”

Given that take, that’s exactly the kind of dominant man most any woman would want, and any person would want sitting on the Supreme Court, as an aside.

And that’s the kind of domination to which men ought not only to aspire, but to culturally foster amongst their fellow men.

Men can do better than to be abusive.

That’s what we’re aiming for these days.

Maybe that’s also what got triggered this last week.

A gospel notion, a freeing framework, a cultural moment…and a great name for a band, come to think of it.

(For the record, after all was said and done, and thanks to the lumberjack-without-a-cape, my two girls and my boy and I totally dominated stacking our wood supply for the winter on my front porch and yard.) 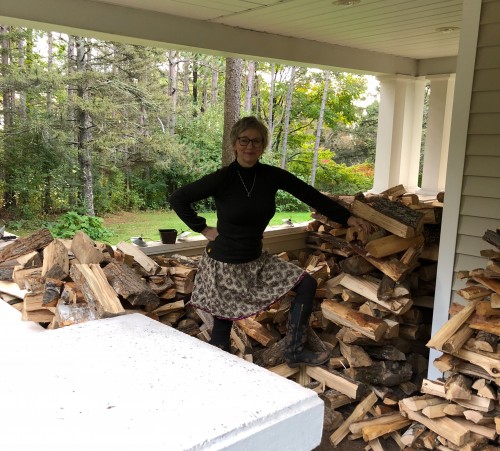 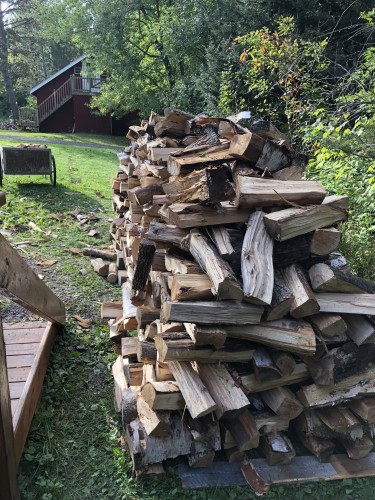 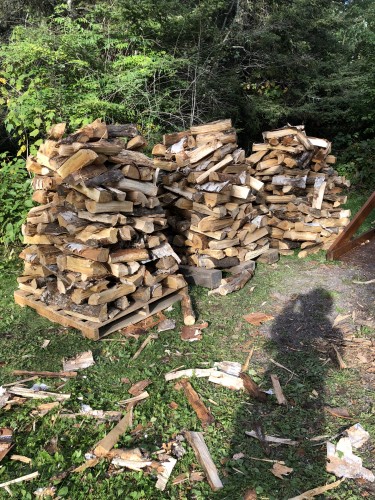 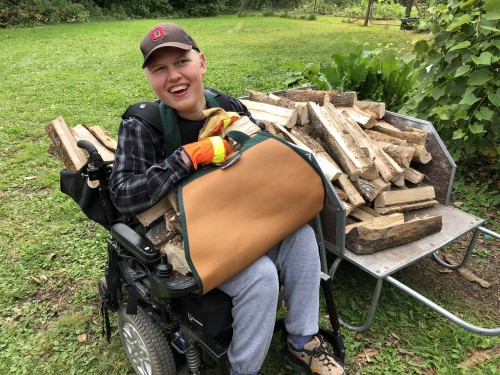 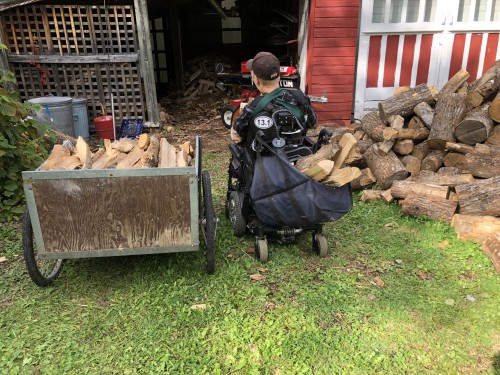