Of Dammit Dolls and Palm Branches

This past week, I celebrated my birthday.

My eyes awoke to my daughter coming in for a family birthday snuggle.  Once my kidlets got off to school, I treated myself to breakfast in town, followed a bit later with picnic lunch by the Lake with my wonderful daughter, followed by coffee at my favorite shop, and then, after Karl and Else came home, preparations for the dinner Feast in earnest: bruschetta, and risotto with Parmesan, and shredded carrot with lemon salad, and chicken Rouladen with rosemary pork stuffing, and an almond cake so simple yet decadent it could bring tears to one’s eyes.

It is a menu dating from 2000, one that my late husband spent the day creating for the first birthday celebrated in Germany.

Now, this year, 2017, I had a different sort of perfect day: good grazing all day, and family, and presents, and maybe even a luxurious nap I allowed myself.  The whole perfect package.

Frankly, though, it’s been an awkward thing to have had this day brimming with personal satiation and gladness when this past week has been brimming with events, both on the grand and on the personal level, of despair and disappointments, frets and furies.

How does one post pictures of birthday bashes and savor such magnificent spreads when simultaneously, innocent Syrian citizens suffer unspeakable trauma inflicted by their own leader; when politically shallow and apparently fickle bombings occur in response, to which the media–even those critical of Trump–fawn over him as finally being “Presidential” (as if we should actually have to -note- when he “finally” does, and as if violence is the Mark of a President-in-Action); when Trump appears to come to the flashy if fruitless rescue of those he refuses to -actually- rescue as refugees; when worshippers in the holiest of their days cannot come together in safety and find peace; when teachers and innocent children are shot at schools; when your purchased airline ticket doesn’t necessarily reserve you an aisle seat for your flight, but may reserve you a flight down the aisle on your seat as you are dragged out and bloodied up against your will?

My dear friend’s car was broken into last week by a hungry homeless person; other friends have a sudden imminent death in their extended family; a Facebook friend’s sister died unexpectedly; and, like occurs for all from time to time, Life has Intervened in our own world in a couple of unexpected and unwelcome ways–even here in the Northern Paradise of the North Shore, it can happen!

As it also happens, though, my wonderful friend Sarah gave me the below for my birthday: a Dammit Doll.

Perhaps one of my best presents ever, and certainly the best timed present ever, for this week, I have needed it.

And I have also wondered: How many Dammit Dolls does one actually need?

I know that I will make good use of the one Sarah gave me on Tuesday.

But here’s the thing: my birthday often falls on or about Easter–I was born, in fact, on Good Friday (some have said that that explains a lot….).

And so along with making good use of the the Dammit Doll, I will also make good use of this Holy Week, this week where we learn that the Holy is found when only despair seems to be all that can be found; when we hear that people, even those whom we love and whom we believe love us, are capricious in their honesty, integrity, and trustworthiness, and are forgivable and forgiven nonetheless; when we hear again that we ourselves are those same sorts of people; when we witness again jarring, upturned expectations–and therefore announcements–such as women being the first–and not last–preachers of the Gospel; and ultimately when we experience that death is real and terrible and wrenching, and also that life is realer, and truer.

By the grace of God, this week sets about to summon and compel and free us to show what that looks like not just in theory, but on the ground that we call Life.

So with a Dammit Doll in one hand, and a palm branch in the other, I enter Holy Week, yearning to hear again that despite, and to spite, death, we are called to be Ambassadors of Life, Welcomers of Joy, and Trusters and Stewards of the Promise that Death Doesn’t Win, dammit. 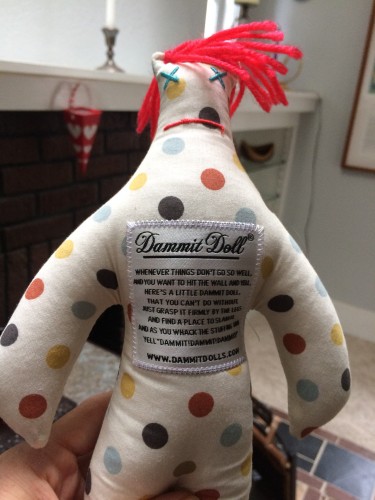 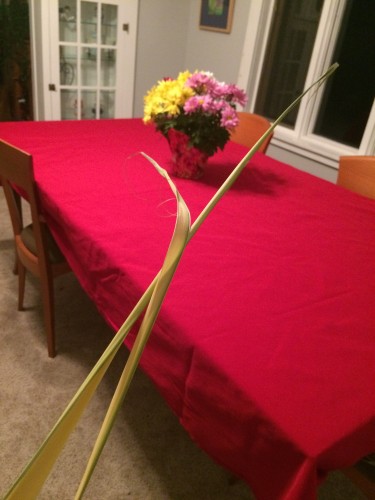