This morning, I announced to my daughter Else that today was finally Epiphany!

We don’t need to sing about or think about partridges in pear trees, or any other trees, for an entire year.

And, I said, today we get to write on our house!

Every year I forget.

“Melchior!  Melchior was one!  The others were…something else.”

And of course we got the giggles and decided that we should put 20 + C + M + B + 17 over our door, but figuring that their names were really Chuck, Marvin, and Bob.

This tradition of “chalking the doorposts” is longstanding in Christian history, but has tended to be more often practiced in Europe.  Not only do the C M and B stand for the (presumed) names of the Magi, but they also stand for “Christus mansionem benedicat,” namely the prayer, “Christ bless this house.”  The marking hearkens back to the story of the Exodus, where the Israelites smeared the blood of a sacrificial lamb over their doorposts as a means of protection from the angel of death.  It also reminds Christians of the hospitality that Mary and Joseph extended to the Magi, men who were non-Jews (i.e., Gentiles) and foreigners, and yet were welcomed anyway to meet the baby Jesus.

The word “Epiphany” comes from two Greek words, epi, which means “on,” or “to,” and phainein “to show.” It is, as I like to call it, the season of God-made-knowings, of occasions when we are all the more attentive to the ways that God and God’s agenda shine through our world, and into darknesses, and as expressions of unexpected hope and new birth and defiance of death.

Key stories in the season are that of the Magi (always celebrated on today, January 6); and of Jesus’ baptism (always the first Sunday of the season), when we recall God’s blessing of Jesus’ ministry of service and forgiving and justice (and our baptismal call to make manifest the same); the wedding feast where Jesus turned the water into wine, (I believe a sign that God is all about community celebrating good food and good wine and good love); and the transfiguration of Jesus (always the last Sunday in the season), when Jesus went to the mountaintop and shone like he were a pillar of light.

Each of these texts invite us to see God’s agenda by seeing the way God works in the world…and by seeing how God calls us to work in the world.

And each of these texts involve some element of surprise: Jews welcoming Gentiles…with gifts?  God blessing a son with the water of life…and sending him out in the world where by virtue of this blessing he will walk the path to death…and that is a good thing, and we’re to do it too? Jesus as a bartender–and essentially saying that God likes parties, and life is too short to drink bad wine?  And Jesus, illuminated, and choosing not to stay where it is beautiful, but to return to where the hard work awaits?

In recent memory, I don’t recall a year when we as a people, and certainly I as a person, haven’t been more ready for, more in need of, the Season of Epiphany.

Dang, on the personal and in the social-political world, have I had occasion to have been sad, and livid, and discouraged, and scared, and indignant, and protective, and lonely, and wrenched, and confused, and tired.

I am so ready for Epiphany, and epiphanies.

The Season is welcome, just like those Magi were.

It is the perfect time to see–and to make known as followers of Christ–that the incarnation of Jesus can still be visible, can still be touched, can still surprise.

It is not, by the way, the season of glossing over, or of being blinded–or blindsided.  God’s illumination causes us sometimes to see things–or have things seen–that we would rather keep in the dark.

But even so, it is the season of God-made-knowing, of God made manifest, of noticing God in small and large expressions and visions, of the announcement that God wishes there to be peace, and reconciliation, and kindness, and redemption, and repentance, and release from anger and fear and resentment…as well as active ways of making each of these come to pass as much as one can safely and reasonably make manifest.

Let me give you three examples of God made manifest, from just today in my little world.

First, today I could not find chalk.

What kind of mama am I, when I have no chalk?  I’d like to say that it’s because we haven’t unpacked it yet, but the truth is, we are fairly well unpacked, and I can’t use that excuse so very much.

So, it’s hard to take part in the tradition of the chalking of the doorways, when we have no chalk.

Micaiah is Karl’s Personal Care Attendant (PCA).  He is an astonishingly cool young man: smart and good-humored and dedicated to Karl and willing to take on our family’s quirkiness.

All day long, Micaiah saw my manifest irritation that I had no chalk for my door-chalking, and heard me muttering that maybe the ashes from our wood stove would work? Oil crayons? Ketchup? Mustard?

And did he ever!  What a great surprise! And look at this ginormous box of chalk, and notice the light illuminating his gift! 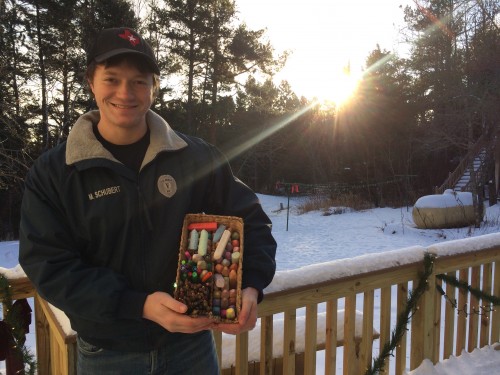 That allowed me to finally have this home blessed by Christ, and announce that all are welcome. 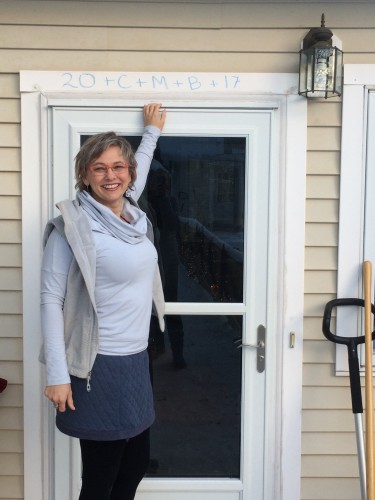 But Else and I have come to feel that we can’t, really, now that we’ve reconsidered history, forget the Chucks and Marvins and Bobs of the world, and so she graced our back door with the following: 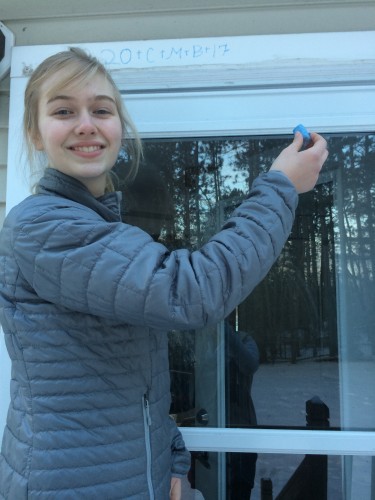 So now, let Epiphany begin, let the season of God-made-knowings commence, may you notice the large and small and surprise manifestations of God in your life and in the world all the more from this day on, and may you also be a manifest presence of the same.

P.S.  Below are four links: the first is the archived list of my blogs about Epiphany (I happen to like Epiphany a lot, you might notice); the next two are articles that I referenced for this blog and may give you fuller information about the season; and the last is a Google Image Search for door chalkings from around the world.

Look what one reader sent me! 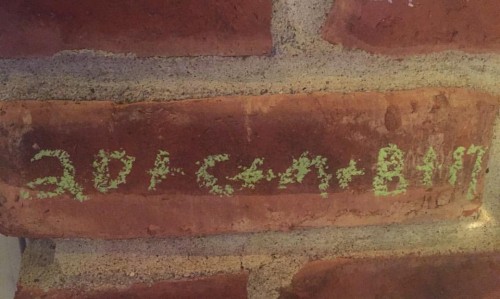 And from First Lutheran Church in Little Falls, MN! 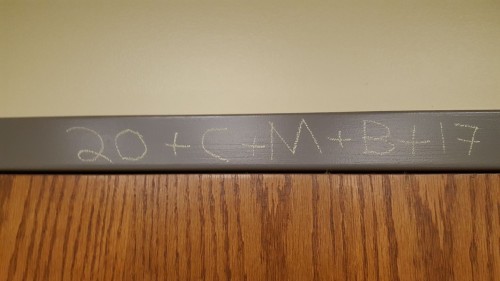 And the door to the Spent Dandelion Theological Retreat Center! 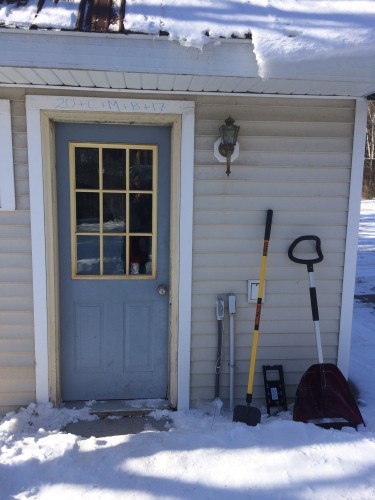 If you are so moved to chalk your doorway, send me a pic and we’ll post them all here!