I know Christmas is around the corner (even my family is starting to bust out the Christmas decorations), but Advent does yet have dibs on our attention for a short spell.

These last few days, they’re like the final days of pregnancy, a season which is itself uncomfortable.

Nine months of baby-growth are hope-filled, to be sure, but still and even so, let’s be clear: especially at the beginning, an urp bucket doubles as a new outfit accessory.

Near the end, the swelling mama tries to maneuver her bulging belly elegantly around tables and through doors and onto beds…and she’s not doing it, so very much, elegantly or at all.

And the baby’s flips, the flips which shift your entire body and draw stunned stares and giggles.

They are actually cloaked internal attacks of feet and elbows taking real cracks at your innards.

In a similar way, you see, Advent’s got its own unpleasantness to offer.

Its kicker to our innards is the cry to repentance.

Repentance is an awkward and uncomfortable topic, because if we have to have it mentioned, there’s apparently reason for it.

We’d prefer to walk around it, and we get queasy thinking about it.

And yet Advent is the season of the relentless and awkward calling to repentance.

“Repent, for the kingdom of heaven is at hand.”

John the Baptist was “preaching a baptism of repentance for the forgiveness of sins.”

So, having listened to all of these texts for the last several weeks, I decided to listen this last week to this show on Krista Tippett’s marvelous On Being: The Refreshing Practice of Repentance.

It is a beautiful podcast, an interview with Louis Newman, Professor of Religious Studies and Associate Dean of Carleton College in Minnesota (Ole though I am, I can concede when Carleton’s got it going on).

Dr. Newman is Jewish, and so therefore is his take on repentance, reflected so deeply in the rich extended exchange below:

DR. NEWMAN: …in Hebrew, there are sort of root words, and the root word of teshuvah — or “chu-VA,” as people would typically say it…in Anglicized form — is that it is about turning. So turning away from the path you’ve been on, back toward a loftier goal, back toward our true selves, back toward God, back toward a righteous life. So it’s a kind of shifting orientation, so really turning your attention somewhere else. It’s also about returning. And in that sense, returning to one’s true nature. As I said a minute ago, that sense of coming back to who we really most deeply are and were meant to be. And turning, of course, to God. And finally, it has that sense of responding.

…If you think about this in terms of a 360 degree circle, if you’re headed in one direction and you turn only one degree or two degrees to the right or to the left, over a long period of time — it may be a very slight turn, but over an extended period of time, if you now walk in that direction, you’ll end up in an utterly different place than if you extend that line outward infinitely. And that sense of turning even slightly…it doesn’t have to be a radical, all of a sudden transformation into a new life. It’s actually a very gradual process of recognizing, “you know, I need to pay attention to that particular failing a little bit more, and move in a little different direction.”

I love everything about his wisdom here.

The notion of teshuvah expressed in the New Testament is metanoia, translated as ‘repentance,’ but meaning, just like teshuvah, a turning-around.

Repentance, says Dr. Newman, and says the Jewish-Christian tradition, is a return to one’s starting place, to one’s center, to one’s core identity.

Note too that beautiful image of standing in the middle of a circle, and walking straight out from it…and then shifting your direction just a couple of degrees to the right or the left.

Thanks to the fine people at Magnifying Aids, below is a version of a 360º circle for your handy reference: 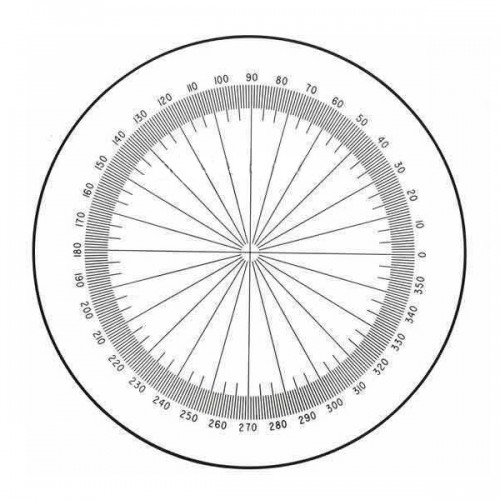 Now consider yourself in the center and walking north to 90º.

But consider that rather, you should be walking north to 91º.

A small degree doesn’t make a big difference, one would think.

It’s only a pesky degree.

But if you ‘repent’ of your established 90º path, if you rather extended your stroll down that singular line right on next to you, the one extending just a smidgen of a bit to the left, in a matter of time you will be in a very different place if you start at an 91º angle than you would have been at a 90º.

What an encouraging way to think about repentance.

I can’t, in other words, do the full-monty turn, but maaaaybe I can do a 1º monty turn.

And then maybe another 1º turn.

And then maybe a few more.

Repentance is, of course, a word often laden with shame, and with defeat, and with sincere uncomfortableness.

But it could, instead, be a word laden with grace, with freedom, with inspiration, with encouragement, and with an invitation to come on home.

Just hop a degree over, just take a tiny turn in a new direction, and come home.

And, as we are on the cusp of Christmas Eve, it can even be a joyful call to prepare for the Advent of a new life to be born in you and in the world.